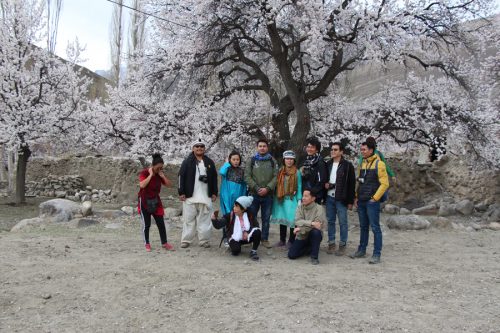 The series of four distinct seasons in the mountain kingdom of Gilgit-Baltistan in Pakistan makes up a unique blend of tourism flavor. Each season is packed with a distinct feature displaying a scenic aura unique in its own features.

Cherry Blossom (Sakura) is a Japanese ritual symbolizes a special occasion. Blossom in Hunza and Nagar valleys signals an exceptional display of a dramatic change of nature welcoming a brand new life. The harsh winters are replaced by moderate aromatic breezes and the landscape dresses in a new vibrant outfit to demonstrate its ultimate splendor. Green terraced fields; flowering trees of apricot, almond, peach, and apple; snow capped mountains; crystal clear rivers and creeks; and blue skies make up a blend of unmatched beauty.

Blossom tour hunza nagar is the series of four distinct seasons in the mountain kingdom of Gilgit-Baltistan in Pakistan makes up a unique blend of tourism flavor. Each season is packed with a distinct feature displaying a scenic aura unique in its own features.

Cherry Blossom in hunza nagar (Sakura) is a Japanese ritual symbolizes a special occasion. Blossom in Hunza and Nagar valleys signals an exceptional display of a dramatic change of nature welcoming a brand new life. The harsh winters are replaced by moderate aromatic breezes and the landscape dresses in a new vibrant outfit to demonstrate its ultimate splendor. Green terraced fields; flowering trees of apricot, almond, peach, and apple; snow capped mountains; crystal clear rivers and creeks; and blue skies make up a blend of unmatched beauty.

Beginning in early April the blooming trees always attract scores of people from Japan / Thailand and Korea to Hunza and Nagar valleys. Cherry blossom season is comparatively short-lived yet the blooming time varies depending on the altitude in the region. The higher altitude regions in Gilgit-Baltistan receive late blooming. 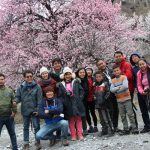 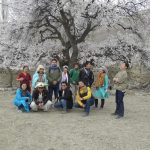 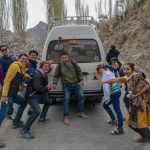 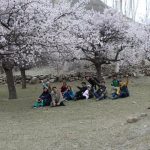 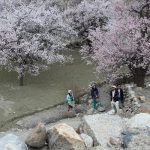 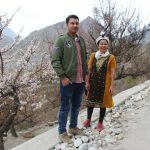 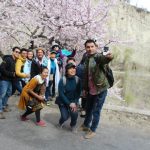 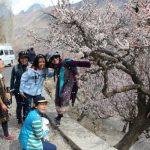 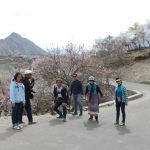 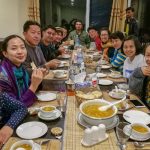 Hunza Nagar Autumn tour is the prime attraction for tourists, as the spectacular scenery of the surrounding mountains is overwhelming. A view of Tupopdan peak, Shisper peak, kuroon peak and Gulmit Tower from various points of Hunza Nagar valley gilgit baltistan pakistan makes it unique. The valley is known for its delicious fruit, terraced fields and longevity of local people and also for its changing colors in various seasons.

Hunza Nagar autumn tour  turns the valley to white, pink, red and purple. Summer is green with colorful flowers while autumn is the most colorful as the whole region wraps in yellow, red and orange. You may have witnessed the colors of autumn throughout the world but you will not see a beautiful mountain like Tupopdan behind the colorful trees and valleys.

The autumn in Hunza and Nagar valley is magnificent and an unforgettable experience. It is the best time for exploring the beautiful Hunza Nagar valley.. 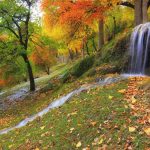 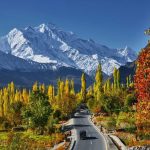 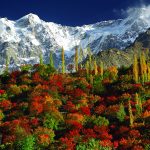 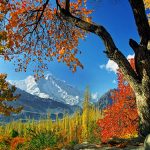 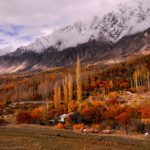 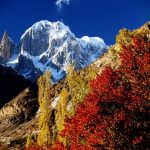 Gandhara Tour : Peshawar region
Gandhara is the name of an ancient kingdom (Mahajanapada), located in northern Pakistan and eastern Afghanistan. Gandhara was situated mostly in Peshawar region, the Potohar plateau (Taxila) & on the Kabul River and attained its height from 1st century to 5th century under Buddhist Kushan Kings & lasted from 6th century to 11th century. Its main cities were Peshawar (ancient Purushapura), Taxila (ancient Takshashila). Gandhara region was conquered by Mehmood Ghazanvi in 1021 CE. During the Muslim period this area was under management and monitored from Kabul and Lahore. Gandhara was part of Kabul province during the Mughal era. Later the Gandhara crossed the Indus and included parts of north-west Punjab of Pakistan. Gandhara was located on the grand northern region and important channel for communication with central Asia and Iran, center for international business activities as well.

Lahore Tour : Punjab Pakistan
lahore fort pakistan cultural heritage tour
Lahore was the cultural hub of the northern part of the subcontinent which widens from the eastern banks of the Indus River to New Delhi. Mughal structures such as the Badshahi Mosque, Mausoleum of Allama Iqbal, the Lahore Fort, Shalimar Gardens, and the mausoleum of Jehangir and Noor Jahan are popular tourist attractions for the city. Lahore is also home to many British colonial structures built in the Mughal-Gothic style, such as the Lahore High Court, the General Post Office, Lahore Museum and many older universities including the University of the Punjab. The Lahore Zoo, thought to be the fourth oldest zoo in the world is also situated here.

Taxila Tour : Islamabad Capital territory
texila culture site pakistan, cultural heritage visit to taxila museum Taxila is 40 kms away from Islamabad the capital city of Pakistan, was once the seat of Oriental civilization. In 6th century B.C, It was first talked about as a satrapy of the Archemenian Empire. It was attacked by Alexander the Great (Sikandar-e-Azam) & passed along to other monarch until finally he reached the hands of Ashoka, who give the shape of the city into a learning and cultural centre. The original Gandhara era pursued in a while. After that Taxila remained the centre of learning, thinking and sculptures. It came to a devastating and pitiable closing stage when sacked by White Huns. Today, here is a well-maintained museum & eight sites sprinkled in the region of a very short radius. Amongst the best conserved are Sirkap, Jaulian (the University) and Mohra Moradu. Arrive and transfer to the hotel.

Baltit fort Hunza- a Heritage in Karimabad Hunza-Nagar
Baltit fort karimabad hunza nagar, cultural historical
Baltit Fort was the old palace of the Mirs of Hunza.It is an ancient fort was built 750 years ago,It is situated in Karimabad, Hunza Northern Area of Pakistan.The story goes that a Princess from Baltistan married the local prince and she brought in Balti masons, carpenters and craftsmen to build it and it. According to local legends, 300 laborers for the construction of the Fort were also part of the royal dowry of the Princess from Baltistan.Stone, mud and timber only were used for the construction of the Fort, because these materials were locally available, cheap, earthquake resistant, sustainable, long lasting and adequate for thermal comfort. The window frames doors and columns are elaborately carved, Timber is used for all the openings. The carving style originate from Kashmiri and Ladakh style.Baltit Fort can be seen from all sides of the Hunza Valley as it is centrally located on the top of a small hill.

Swat Museum, Butkara, sites & Mingora Bazaar.
swat museum tour, heritage historical cultural tour
Butkara ruins are one of the most significant Buddhist places of pilgrimage in the valley. Site is consists of a main stupa around which pushed around 215 votive stupas, in it seems that magnificent disarray. The main stupa was supposed to have some ashes of Lord Buddha built by the Mauryan Emperor Ashoka. One can see still there are statues of lions bend down on their side. They may be fell off the ends of the tall columns which once located close to the stupa.
Mingora Bazaar is the business centre which is important to visit, one can locate emeralds, for which Swat Valley is famous in this region. Then carry on to Murghazar where you will visit the old white palace constructed from white marble and ornamented with elaborated carvings.

Swat-Takht-e-Bhai : Peshawar
takht bai peshawar pakistan historical heritage cultural tour
Takht-e-Bhai is a Buddhist site which is situated in Northwest of Mardan on the road to Swat. It is the most inspiring and complete site in Pakistan. The main construction of the Takht-e-Bhai compound is the monastery and stupas founded in the 1st century AD & left un-used in the 6th century. Surrounding the monastery on the point on top of it are the remains of private houses, some of them are the three storeys high. The name of Takht-e-Bhai means the hill of springs. There is considerable proof to prove that during the Buddhist period there were lots of springs on the hill here which have now dried up around 200 AD. When Raja Varata was the King of Gandhara, Takht-e-Bhai was the capital of the Kingdom of the era. The stupas on the site were found to contain square court bounded by a series of cells which accommodates the images.

Arrive at Benazir Bhutto Airport (Islamabad), meet and transfer to hotel for overnight.

Drive to Peshawar en route visit ancient city of Taxila, melting pot of culture, has history of 1000 years. Visit Taxila Museum, its collection mainly focus on Gandharan art, there are some 4000 objects displayed , including stone, stucco, terracotta, gold, iron, silver and semi-precious stones. Mainly the display consists of objects from the period of 600BC to 500 AD. Buddhist, Hindus and Jain are well- presented. Sikap city Ruins from 2nd century BC to 5th century AD. Dharmarajika, the largest Buddha stupa in the area of Taxila. It is thought to be established by the Maurya Emperor Ashoka in the 3rd century BC and Jaulian Buddhist Monestary from 1st century AD to 5th century AD, later proceed to Peshawar. On arrival at Peshawar transfer to Hotel for overnight.

Morning visit Peshawar Museum, the collection has almost 14,000 items based on Gandharan, later drive to Swat en route visit Takht-i-Bahi Buddhist Monastery. It was 1st Zoroastrian complex, was listed UNESCO world heritage, Shingardar stupa and carving BuddhaGhalegay. On arrival at Swat transfer to hotel for overnight. Peshawar Museum will be closed every Friday (time opens 9am and closes 4pm)

Morning Visit Butakara Stupa- is important stupa in Swat valley, was built by Muryan Emperor,Ashoka 2nd century BC, Swat Museum has best collection of Gandhara. Take an excursion to Malajaba to see the panoramic view of valley and also ski resort at Malajaba and back to Swat for dinner and overnight.Swat Museum will be closed every Friday (Winter time open 9 am and closed 4PM)

Breakfast at hotel and drive to Islamabad via Malkand pass, on arrival at Islamabad city, tour of Capital of Pakistan- Islamabad, including Faisal Mosque, Daman-e-Koh, supermarket. Dinner and overnight at hotel.

Breakfast at hotel and drive to Lahore, en route visit salt mines, later proceed to Lahore. On arrival at Lahore transfer to hotel for overnight.

Morning visit Lahore fort, Mosque, Museum, Anarkali Bazaar. Afternoon visit Wagah border to see the flag ceremony between India and Pakistan, then back to Lahore. After Dinner, transfer to Lahore Airport for flight back home.

Kalash Festival is one the most unique and taboo for many in Pakistan and elsewhere on earth. Kalash  tribe celebrates many festivals around the year.  Chilam Joshi is also known as  spring festival. The Kalash people celebrate this four day festival across all three Kalash valleys of Rumbur, Bumburet and Birir. A large number of domestic and foreign tourists attend the Chilam Joshi festival every year. The three main festivals are Chilam Joshi (spring festival), Choimus (winter festival) and Uchal (summer festival). All three are explained below:

Chilam Joshi Festival is one the most vital kalash festivals.   Chilam Joshi is also known as Kalash spring festival. The Kalash people celebrate this four day festival across all three Kalash valleys of Rumbur, Bumburet and Birir. A large number of domestic and foreign tourists attend the Chilam Joshi festival every year.

The main objective behind the Chilam Joshi is that Kalasha men and women can find themselves a spouse to get married. The women wear traditional attire with lively colors and hair dresses have patterns of flowers on it. They wear beaded necklaces which compliments their dresses and head gears.

Uchal, also known as Utchal is a summer festival. Kalasha people during this festival pay homage to God by celebrating the harvest and also thanking their God for blessing them with good food and crops. Corn, buttermilk and cheese are prepared to celebrate the festival.

Men wear traditional Shalwar Kameez with a waistcoat made of wool. They dance together and sing in a circle on drum beats. Every year this festival brings smile to the bachelors and spinsters of Kalash Valley tribes as it gives them an opportunity to choose their life partners and announce their names on the last day of the festival.