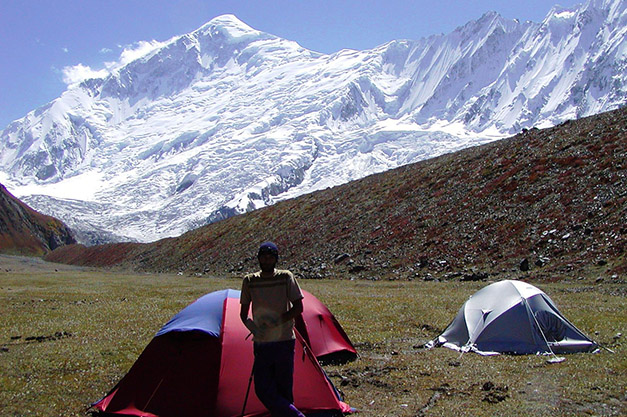 Diran Peak Trek is  easily accessible because of the Karakoram Highway. There is confusion about its height but now all agree that it is 7,273m. Height, it is one of the fascinating peaks that dominates the Gilgit valley and adds special color to its otherwise rugged beauty. The peak is called Minapin as well as Diran. It is situated in Rakaposhi – Minapin Nagar,

Diran is a mountain in the Karakoram range in Nagar Valley, Gilgit-Baltistan, Pakistan. This 7,266-metre (23,839 ft) pyramid shaped mountain lies to the east of Rakaposhi(7,788m). Diran was first climbed in 1968 by three Austrians: Rainer Goeschl, Rudolph Pischinger and Hanns Schell. Earlier attempts by a German expedition in 1959 and an Austrian expedition in 1964 were unsuccessful.

A three-member Austrian expedition, which included Rainer Goschl, Rudolph Pischinger and Hanns Schell, decided to try its luck on Diran in 1968 after being refused permission to climb Kampire Dior peak. It set up camp 1 at 4,800m. Big crevasses, inclement weather and deep snow is recorded between camps I and II.